Showing posts from October, 2009
Show all

October 14, 2009
Greetings to All, For those who were not able to attend the October Class, here is a quick summary of the topics covered, courtesy in part of a very gifted student! The focus of the class was the "Landscape Method" of interpreting a spread of Tarot cards, rather than trying to decode each card on it's own & then put it in context with the rest of the Tarots on the table. To do this, I first presented the Minor Arcana by element & discussed the nature of the elements as fields of activity. Then the Minor Arcana were broken into primary groups for interpretation. These groups were the Aces, Tarots numbered 2 through 10, and the Court Cards. We began to discuss the Minor Arcana and their relationship to signs & planets.. or the sphere of the Zodiac if you prefer. As class was nearing an end, we looked at the Major Arcana just a bit to give an overview of the primary meaning of each card. This was an intense and fast paced class! Second Sunday in November, I
Post a Comment
Read more 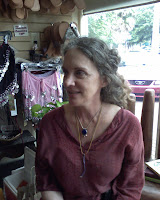 Learn to read the Tarot - Monthly Tarot Class, Five Points, Jacksonville, Florida Join us for the second in a series of ongoing classes on the Tarot. The second Sunday of every month, Ann George , a professional Tarot consultant and clairvoyant reader, teaches a Tarot class at The Midnight Sun, 1055 Park Street, Jacksonville, Florida. From 1:00 PM until 2:00 PM the class will begin to cover the following topics: Cabalistic Creation Theology; The Paths Between Sephirah in relation to the Major Arcana; Archtypes and Human Nature; Spiritual Astrology & Planetary Symbolism; Number as Symbol for the Nature of Activity; Element as Symbol for the Field of Activity; Astrology, Signs, and Human Nature as Relevant to the Interpretation of Tarot; Ethic & Intent for the Right Use of Tarot; Psychic Self-Protection; Meanings of each of the 22 Major Arcana; Each class will be followed by a question and answer period & group discussion from 2:00 PM until approximately 3:00 PM. This
1 comment
Read more

First Friday in Five Points starts a bit early for those interested in a Tarot reading. Ann George, professional Tarot consultant and clairvoyant reader, will offer Tarot readings beginning at 5:00 PM at The Midnight Sun. The Friday Night Special is for those new to Tarot and the psychic reading experience. One question will be answered for a $10 fee. Please visit Ann's site for more information about Tarot & the reading process. The Midnight Sun is located at 1055 Park Street, Five Points, Riverside area of Jacksonville, Florida. See you there?
Post a Comment
Read more
More posts

Ann George
Welcome! I am Ann George, an Usui Reiki Master in practice since 1996. I am very happy to return to blogging about energy medicine - from a Last Century point of view. I hope you enjoy this blog. I work as a professional psychic reader, medium and Tarot consultant. I offer sessions by phone or Zoom at present. Please visit my site for more information.